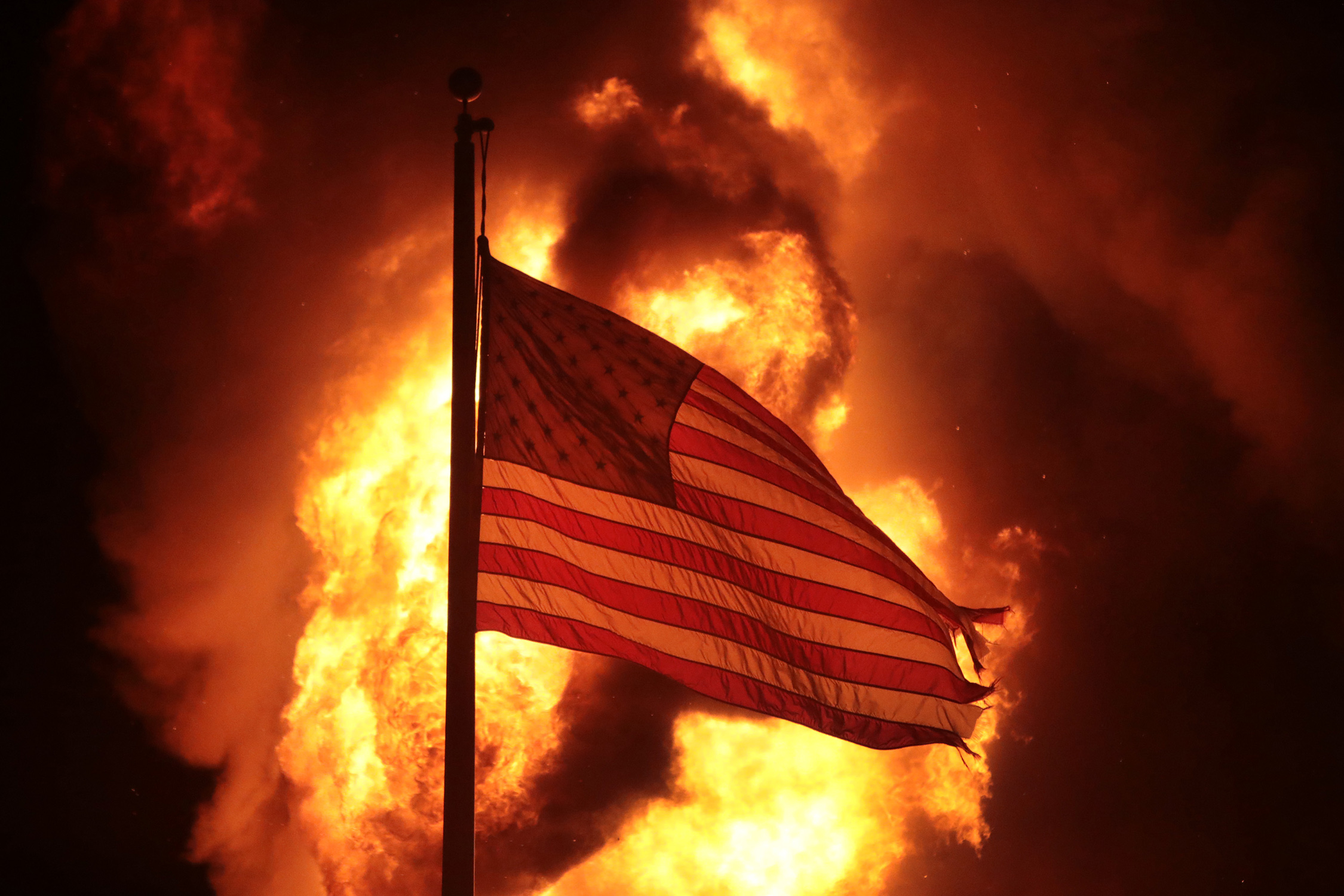 The trial for Kenosha killer Kyle Rittenhouse has begun, with some new video footage showing Rittenhouse shooting people. The protests that occurred in Wisconsin are part of a larger set of protests and unrest that has occurred everywhere else. A new study tells why. Covid has now robbed humanity of 28 million years of life (so far).

You could assume that things are more then a little out of control in Amerika and you’d be right. A reasonable jury will find Rittenhouse guilty of first-degree murder for killing two people and injuring a third, firing his illegally straw purchased AR-15 rifle 8 times, one more then the police officer that shot Jacob Blake in the back, which started this protest.

The new study reveals that non-representation by politicians and injustice as the primary reason for the rising unrest. Large numbers of people are rebelling against the way things are, demanding change.

But why? Here, the authors highlight one particular problem: democratic failure. Their research found that a majority of the protest events they recorded — 54 percent — were prompted by a perceived failure of political systems or representation. Roughly 28 percent included demands for what the authors described as “real democracy,” the most of any demand found by the researchers. Other themes included inequality, corruption and the lack of action over climate change. But the study’s authors say policymakers do not respond adequately.

I think this was obvious and didn’t require yet another study, but be that as it may, people are unhappy and upset and they’re reacting in ways which are only going to get worse (in my opinion). Rittenhouse thought it was his “job” to travel across state lines as a minor and “defend” someone else’s property (allegedly), killing several people “rioters” in the process. Not only was this an incredibly stupid decisions, so was the decision by his friend that made the straw purchase, and his mother who drove him to the protest.

He wasn’t the only armed individual there, or the only one who fired shots, but he was the only person who killed and injured people – this time. Other protests have seen other armed conflicts and death, but it’s incorrect to use these for comparison purposes. What matters is the facts in this case. We’ll have to wait and see what the jury decides, but Rittenhouse should pay for his crimes.

Untrained citizens carrying assault rifles and taking matters into their own hands is a recipe for disaster. This is also how a lot of mass shooting are committed, a particular problem almost – but not quite – unique to America where the gun culture and the “fuck you” attitude of so many rules the day.

I live very close the the “Redoubt” in Idaho where heavily armed resisters are gearing up for civil war, convinced that they are “losing their country” due to “liberal politics” and COVID restrictions, among other reasons. I’ve examined their arguments and claims and find them nearly baseless and without merit. None of their freedoms have been infringed as they allege. None of their liberties have been taken away either. They just don’t want to follow anyone else’s rules – and they don’t want you to follow the rules either.

This area is one of the fastest growing areas in the country. It’s now too expensive to live there and is driving out the locals as right-wing extremists flock to the region, bringing their guns, dogs, pickup trucks and rabid belief systems. This is also happening in places like Coeur De Alene and Moscow, Idaho where “ultra-conservatives” are trying to take over the entire towns.

When America implodes internally, it’s going to be the fault of these people who have refused to abandon superstitions, connedspiracies and Q-Anon fabrications about “stolen elections”. The rising tide of stupidity and ignorance has permitted unhinged and ungrounded in reality people to come to the forefront of politics and unrest. They’ve convinced themselves against all of the evidence that they’re the ones who are right – and they’re willing to die for those beliefs, taking more then a few others with them (which is also their earnest hope). They’ve rejected knowledge, research, facts and evidence in favor of confirmation bias and political / religious idolatry, trampling the very book that they claim that they follow.

I’ve found that there is no reasoning with these people at any level. They’re rabid, angry, prone to violence and aching for a civil war. The only reason it hasn’t happened yet is most of them are actually cowards and pretenders, willing to accept government handout and free money while claiming how utterly evil and Satanic the government is. Yes, they’re hypocrites in the first degree, but that’s a label that they wear proudly along with their stupid red hats and Q-Anon t-shirts. They’re powerfully stupid people, hell-bent on destroying this country and setting up a fascist dictatorship that they wrongly think will serve their best interests while oppressing everyone else that they don’t like – which includes virtually everyone who isn’t like them and won’t join their cult.

In my wife’s home town, where we both met and got married, the entire city has been taken over by a similar cult. When speaking to my mother-in-law, she’s nearly in tears at what has happened to her town. I don’t recognize the place and am constantly reading in the news about what the fanatical religious right has done. COVID had raged through the city while this group has refused to obey and protective measures, ensuring only more death and suffering for everyone else.

I believe America has lost its mind and politicians are grossly out of touch with what is happening here. I further believe that things will get much, much worse and devolve into street warfare and regional conflicts as the anger, frustration and hatred explode. We’re way overdue for corrective actions, and many law enforcement agencies and departments seem to support the idea that insurrection should be undertaken. Many have been staffed with ex-soldiers and paramilitary types that lust for blood – American blood. So far, the Department of Justice (DOJ), Homeland Security and the FBI seem to be (still) hamstrung internally on dealing with this escalating problem.

We’ve YET to see the DOJ take any actions on the January 6th Capitol riots, which is truly amazing and highly disappointing. Meanwhile, that traitor with the bad hair and worse leadership is still trying to foment rebellions and civil war while claiming he’s the rightful President. The media is still stupidly giving this clown far too much coverage to their own peril, which I think is a huge mistake, but then again, I don’t control the media and nobody listens to what I have to say anyway.

America is imploding, by design and by intention from ill-meaning idiots. This could not have come at a worse time either when we have real issues that need to be dealt with. Everyone should be aware of these unfolding events and where they are headed. Sitting on the sidelines might seem safe, but nobody is safe here, not anymore and likely, never again. The idiots are gaining power, arms, support, funding and political representation. There can be only one possible outcome to this rise of fascism – armed conflict. War on American soil. The forces of superstition, hatred, fantasy, fascism and violence arrayed against democracy, representation, fairness and justice. I have NO confidence whatsoever that our officials are even slightly prepared to deal with this.

3 thoughts on “America Is Imploding”