Desdemona does it again, publishing 50 Doomiest Images of 2014.

Head on over there and get your doom on, once again, it’ll be worth your time.

I’ve (very) often wondered what it would take to get humans to pay attention to the devastation going on all around them. I’m extremely pessimistic about this topic. It seems as if virtually nothing will get our attention, or force us to change our ways, no matter what the actual evidence is.

Maybe something / someday will, but all of the news and reports that I’ve seen indicate that this has not happened yet – and probably never will. Indiscriminate human activity had done an unbelievable amount of damage to the Earth’s fauna.  This is an accelerating trend – despite all the news reports, studies and analysis that are taking place, all with the stated intention that these efforts will help us make better decisions. 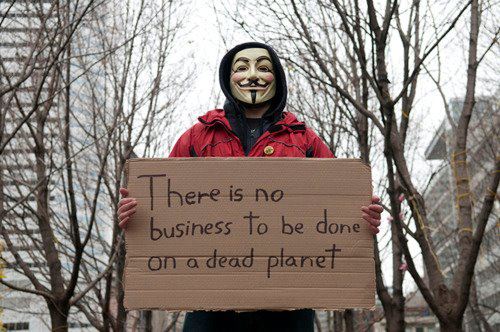 Except that is still not happening. My pessimism is based upon the actual evidence, which is why it’s always good to stay abreast of the news stories. They’re all telling us the same thing if you pay close attention – we refuse to change in any meaningful way or restrict our impacts upon the biosphere.

That’s all well and good if you’re the top predatory species on the planet – but it’s not well and good for anything else. And there is always that giant ‘comeuppance’ (payback) that occurs when humans finally realize that a dead planet devoid of life is no place they can live either.

I watched the Netflix series “How To Survive The End of The World” which was both intensely stupid and infotaining. I’ve studied out some of these scenarios myself, having published particular points here years ago. Virtually ALL of the scenarios in the entire series completely failed to realize that global food supplies run out in just one month, which instantly nullifies all possible efforts at “adaption”. With no more crops due to volcanism, extreme drought, extreme rains or extreme cold, humanity collapses in mere weeks.

There won’t be any survivors foraging for forgotten food in supermarkets, delivery trucks or abandoned convenience stores years later.  This is classic Hollywood deception, a false meme that hasn’t been honestly examined for accuracy.

There won’t be any mega-projects to build floating cities, underground survival refuges or 13,000 ft. walled cities. When the food runs out, civilization and all of its capacities and activities stops – permanently.

The living biosphere is essential for human existence. Everything from soils, microbes, insect, birds, bees, sunlight, fresh water and climate, was utterly ruined. THERE WOULD BE NO FOOD and that is what would collapse civilization and any effort by humanity to “adapt”.

Moreover, no “biodome” experiment has ever worked (they have all failed) which means we cannot build a closed system anywhere and expect it to work for very long – not on the surface of the Earth, not under ground, not on the ocean or under the ocean – and not in space either.

The facts are we cannot survive or even endure very long without a living biosphere (ie., the natural environment). There are NO EXCEPTIONS to this, which is why it is so essential that we preserve this as much as we can.

The series barely touched upon climate change, but if you understand what happens at 2 – 4 degrees warmer global average, you already know. I think it was telling that they didn’t go into this very real “scenario” now happening to us all. That’s what the entire season series SHOULD have been about – what is really happening, and what this means, and what, if anything, can be done about it, instead of what “might” happen.

Netflix even has another intensely stupid show called “Doomsday Castle” complete with hot pants and idiot actors.  I struggled through bits and pieces and honestly could not make myself watch much of it. The cast played “drafted volunteers” who were recruited by their idiotic end-timer father to help him finish his lifelong ambition of a fortified “castle” in the wild.

Except none of it was actually true. The scenarios were obviously scripted, the location was faked and the scenarios chosen were beyond stupid. Even the “castle” wasn’t real. Everything these clowns did was wrong. But more importantly, everything they thought was wrong and everything they believed was also wrong.

This is why you’ve never seen a promotion on this site about them. Much of what they’re teaching and embracing is pure garbage. Fleecing your pockets is their primary goal.

The entire preparedness meme has been seriously hijacked by many of these fools. Their nonsensical approach to “survival” is a joke and unworkable (it will fail, quickly), but they’re reaching millions of viewers with bogus information. Hollywood has embraced this in a big way, with a corresponding spike in ticket sales and profits.

So far, none have bothered to depict a “true scenario”, which if they had, this would reveal a startling truth: if we lose the biosphere to any catastrophe of any kind, then its game over (extinction) for humans. Sulfur dioxide from volcanic activity blocking out the sunlight for decades? We’re done. Extinct. We’re not going to grow the calories needed to survive. We’re not going to tunnel down and build underground cities and grow food with hydroponics. People forget that stuff breaks and can’t be replaced when manufacturing is gone.

A technological civilization such as ours can only survive when our technology continues. Technology isn’t immutable, it is in fact extremely dependent upon many things (energy, mining, manufacturing, production, distribution and skill), and it is this increasing level of dependencies that makes it extremely vulnerable to failure at any point.

Technology is an immense help (to humans), but it is also our Achilles heel. Its dependency upon a habitable biosphere cannot be underestimated, because technology cannot “replace it” as is oft assumed.  This is where so many futurists and even some scientist fail in their predictions, making a series of critical but false assumptions that have no basis in facts or reality.

Living organisms exist because of the chemical reactions that occur within the biosphere, which we have never been able to fully duplicate. Our very best efforts by the world’s most advance institutions and brightest minds have yet to create a closed self-sustaining system that can maintain life indefinitely. Only the Earth itself has been able to do this.

Why do you think science is struggling so hard to find signs of life on other planets? Because the existence of life signifies hope, future, survival for other possible forms of life.

This is why it is so critical that we don’t screw things up too badly here – we cannot replace it with anything despite our very best efforts, whatever they may be. The biosphere and the many different lifeforms and chemical reactions within it is absolutely essential for our continued existence.

I am quite pessimistic about our long-term (and even short term) survival prospects because we categorically refuse to accept our relationship, dependency and contribution to what is unfolding now within the environment. But I am more then pessimistic about our chances of “surviving” without a habitable surface on the Earth – there is zero possibility that this could happen. In short order, we’d all die out because our technology would fail rather quickly.

Ultimately, this means that technology cannot ever “save us from ourselves”. Ponder that for a moment. If we insist on fucking things up so badly that we destroy the biosphere like we are now doing – it’s game over, no matter what for the human race. The same is true if there is any sort of global disaster. We’re talking the End of Days here, by our own hand, which is actually unfolding week by week as we continue to wipe out what remains.

The hopium that we can devise and innovate our way to our own salvation won’t happen as expected. Technology does not replace human behavior – it’s actually enhances it, and whatever faults or flaws or greed we have will still remain – we’ll still go on doing what we’ve always done only faster and on a bigger scale then before.

This is what needs to change within our species. The acknowledgement that we absolutely must accept our dependency upon all that has kept us alive all these millennia, and to protect and preserve this life-giving relationship.

I’m being facetious here, but go outside and thank a microbe and tell it you’re glad that it’s alive.  If we can finally gain that level of knowledge, understanding and appreciation, we might stand a chance at changing what we’re doing.  However, if we can’t restrain ourselves and allow other life to co-exist with us here, then neither can we hope to survive.

It is astoundingly stupid that one species would deliberately, even maliciously wipe itself out, but that is what is unfolding now. If you have yet to come up to speed on this topic, read the link above, follow the articles on Desdemona’s website and gain the understanding that we have got to change our attitudes about what we’re doing on this planet. As soon as possible.