Desdemona has a disturbing propaganda piece from the Heartland Institute: 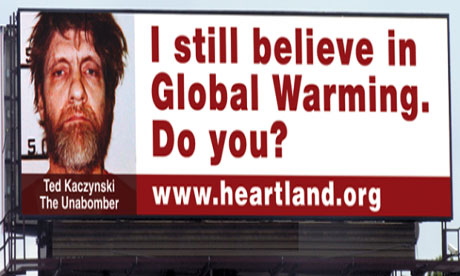 The full article is here on the Guardian.

“This is why the most prominent advocates of global warming aren’t scientists. They are murderers, tyrants, and madmen.”

Actually, the most prominent activists ARE climate scientists. The above statement is a bald-face lie.

They’re certainly not ‘murderers, tyrants and madmen’, but educated individuals, organizations and entire agencies dedicated to the research and investigation of climate science.  People that have dedicated their entire lives to understanding what is going on, versus paid propaganda “institutes” in the crotch of Big Oil.

But if they’re all madmen, then we should all just ignore their claims — and what the climate is actually doing.

Definitely one of the more outrageous propaganda campaigns I’ve seen yet.

Which means they are getting desperate, mighty desperate, going beyond mere name calling and now trying to equate ‘believers’ (and the science) to terrorism.

But this will backfire on them, very very badly.

Big climate deniers like this are truly the climate terrorists, dedicated to mass mind-control and propaganda. This latest campaign by the Heartland propaganda machine will be undoubtedly picked up by the denialist crowd (ie., Alex Jones and his ilk). You might want to read the comments on the Guardian article.

It’s too bad we are having to endure this garbage. Big Oil is angry (and very, very greedy). Their swatting at all the buzzing going on around their industry. What I find odd about all this behavior is how self-defeating it will be in the end. First off, nobody has to do anything, the “proof” is going to keep occurring (catastrophic climate events). Secondly, anyone  — including Industry, is going to be made to look like fools because these proofs will keep being recorded and noticed by the rest of us. So why fight this with stupid propaganda?  Money?

That doesn’t make a lot of sense either.  Switching to low-carbon activities will be immensely profitable for the front-runners who jump in first (or “best”).

The only thing that I can think of that is probably going on is some fat cat, overfed CEO’s are “reacting” with bullying tactics, refusing to succumb to the inevitable, tossing billions of dollars at what is very clearly a global propaganda campaign.

They also do not want people to think that they may be responsible (primary culprits actually) on anthropogenic climate change. THAT would be a hard legacy to take to your grave, knowing that your actions helped destroy the biosphere of an entire planet.

So cognitive dissonance takes a firm hold on these mental incompetents, and we get stuck with their stage 1 of the 5 stages of grief:

Actually, I’ve long held that it’s not going to be okay, too late for that. We’re in a destabilized condition now, and not expecting things to experience a restabilize climate for a very long time (and when it does, it is estimated to be either inhospitable or of such and extreme nature that few humans will be able to survive).

I wish I had better news. Please read Desdemona daily, he’s still cranking out the good stuff about how fast it is unraveling from news sources all over the world.

2 thoughts on “Climate Propaganda Warming Up”