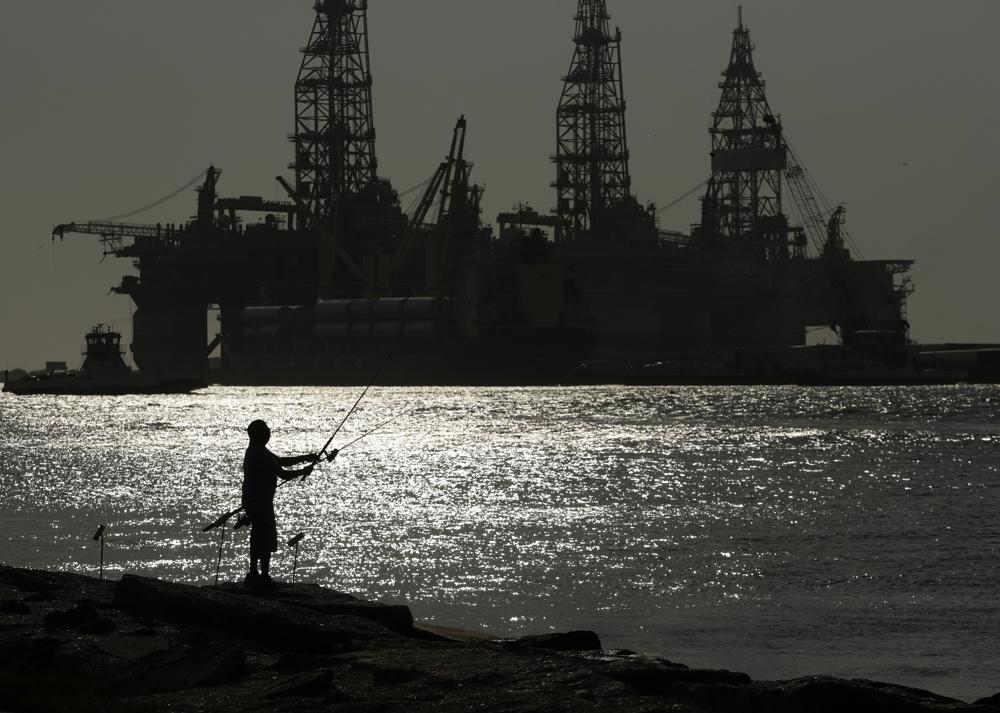 In an expected response to the failed COP 26 “talks”, the United States has sold billions of dollars worth of oil crude in the Gulf of Mexico.

US to hold huge crude sale in Gulf

NEW ORLEANS (AP) — The U.S. Interior Department on Wednesday will auction vast oil and gas reserves in the Gulf of Mexico estimated to hold up to 1.1 billion barrels of crude, the first such sale under President Joe Biden and a harbinger of the challenges he faces to reach climate goals that depend on deep cuts in fossil fuel emissions.

The livestreamed sale invited energy companies to bid on drilling leases across some 136,000 square miles (352,000 square kilometers) — about twice the area of Florida.

It will take years to develop the leases before companies start pumping crude. That means they could keep producing long past 2030, when scientists say the world needs to be well on the way to cutting greenhouse gas emissions to avoid catastrophic climate change.

Always watch what they (and everyone else) does. What they do is what counts. It is the metric by which you can determine their true intents. Words and promises and commitments are easy and dirt cheap to spread around, but they have no meaning or relevancy at all. It what they do that matters, and here we have yet another example among millions of other examples that demonstrates that the United States is NOT going deal with climate change.

More oil extraction means they intend to perpetuate this suicidal set of living arrangements and expand them further. Growth now means death in a world where overshoot and carrying capacity of the planet was grossly exceeded long ago.

If you didn’t notice, the Associated Press picture used for this article is meant to imply that oil drilling is compatible with human recreation like fishing. Only an insane worldview would promote such nonsense.

I fixed the AP title to what is really happening here in the blog title. But what I really want readers to understand is how global leaders, not just the U.S. but all global leaders, are going to drive the world right past any possible habitability for humankind and all other species on Earth. There is virtually NO disputing this fact, the evidence is insurmountable now.

Meanwhile we will all be infotained with more empty useless words and promises while they drive the dart of extinction through the hearts of all life on Earth. Unfortunately, none of us can save ourselves or anyone else from this madness. I’m trying to accept that the best I can, but it’s hard. It’s really hard. My earnest desire would be to see this insane juggernaut of expanding death just end and restore the natural balance of the Earth and life on this planet.

This holistic view is opposed by almost everyone and everything, who fail to see that ‘progress’ is destruction, that growth is doom, that expansion means extinction, ignoring the vast overburden of people and ‘civilization’ that has been hung like a millstone around the neck of the world, drowning us all in a sea of poison and pollution and widespread destruction of the web of life that actually supports us all.

More is wrong. Morally wrong, ethically wrong. Global resources of water, energy, land and even fresh air are running out due to extreme overshoot of the human population and the depredation of the natural world. We’re witnessing and participating in the sixth mass extinction of life on Earth and barely even notice, even as it threatens our own existence. Ignorant techno-utopia claims and future “promises” of the wonders to come (for humans) are endlessly paraded out by the world’s media outlets to distract us from the horrifying, truly terrifying unreality unfolding now. Our planet is dying rapidly, faster and faster by our own hand.

We’re on a accelerating treadmill of death and destruction, I know it and you should too. Growth and progress and technology will NEVER be able replace what we’ve already lost, it will only take and destroy more then it already has. We can’t keep doing what we’ve already done and expect any different results then what we have already seen and experienced. It’s just that simple.

The entire world desperately needs to choose a different path, but like the example given above, we absolutely won’t. We’re going to devour what’s left. This is a warning I’ve been making here for nearly twenty years now and it’s proven to be absolutely correct.

In 2020, the United States consumed an average of about 18.19 million barrels of petroleum per day, or a total of about 6.66 billion barrels of petroleum. This was the lowest level of annual consumption since 1995. The drop in consumption in 2020 from 2019 was the largest recorded annual decline in U.S. petroleum demand. The decrease was largely the result of the global response to the coronavirus (COVID-19) pandemic.

How Much Oil Is Consumed In The United States

There are thousands of these sales and oil extraction efforts happening all over the world (65,000+ estimated active oil wells, they’re hiding the true number). Actually, it’s millions of oil wells that actually need to be included, most of them are abandoned but still leaking methane, an even more dangerous greenhouse gas. Remember, if they’re “abandoned”, that means we converted the oil into deadly greenhouse gasses, literally poisoning the whole Earth, and we intend to keep doing it.

This is insane behavior by an insane, suicidal civilization. The outcome of all this is absolutely certain.