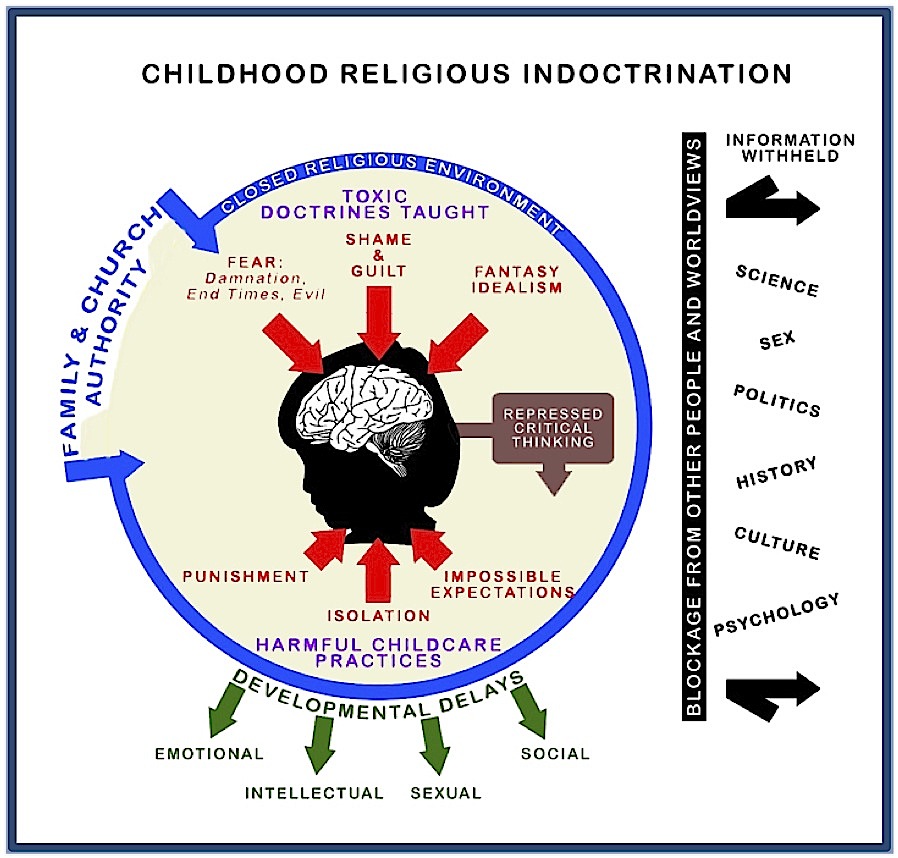 Religious scriptures that legitimize violence cause more believers to support deadly extremist acts – What is odd about this ‘study’ is that it took so long (apparently) for this to be done. It’s been known for centuries that violent scriptures give rise to more violence.

Fundamentalism and fundamentalist sects are also known to give rise to more violence then their milder cousins. Anyone who has paid attention to violent crimes will often note that religious beliefs are often tied to violent acts, with many of these believers belonging to fundamentalist groups.

The problem with this study is that it only examined religious beliefs and how they applied violence to ‘enemies of the faith’. That does not go remotely far enough. Religious violence (extremism) is found in all faiths, within households against the believers own family, and against members of their own faith. Parents killing children, children killing parents, brothers attacking sisters and vice versa, believers attacking and killing other believers and so on.

During my years in the ministry, I saw a lot of religious fundamentalism and was keenly aware of the violent tendencies that existed. Only after I left did I engage in a detailed examination (not to be confused with a ‘study’) of what extreme fundamentalism fosters. It destroys individuals, families, groups and churches. It spawns dangerous extremism that can lead to numerous acts of terror. Since nearly any scripture or holy writ can be interpreted to mean anything, including “secret codes”, “hidden meanings”, “enlightened scripture” and so on, fundamentalist will often resort to such tactics to justify their actions. They will also often practice ‘fulfillment’ of scriptures with circular reasoning and will even engage in direct attempts to fulfill prophetic interpretations.

Those actions on the milder side can be verbal violence, browbeating and abusing family members, children and other people. Psychological violence within fundamentalist groups and people is very common. So common in fact that this is normalized behavior within these groups, but in reality it is cult-behavior, exhibiting all the signs and practices of cult teachings.

On the more violent side, executions, strangling, exorcisms, assassinations, random shootings and mass murder have been documented as emanating from fundamentalist, usually on an individual level, but sometimes performed by entire groups. Some really weird and disturbing stories can be found in recent news out of Russia. Rather then admit to the sheer foolishness and violence of these individuals committing these crimes, the priesthood is claiming they should be the ones engaging in these practices.

Fundamentalist refuse to self-educate and insist on living within their own fabrication of reality. They won’t read historical research, or the work of expert linguistics, or anything that challenges their ‘faith’ is considered heresy. This is true of Muslim, Christians and Jews. Since violent teachings can be found in any of the scriptures held by these religions as ‘holy writ’ (inspired by God) they can justify their violent actions against contrary teachings, believing they are totally justified in their actions (up to and including murder).

Criminal cases abound, literally countless in number with some of these people believing that they are acting in accordance with their ‘faith’. But this isn’t faith, this is indoctrination. Religious texts that advocate violence are teaching a form of brain washing, justifying historical actions of violence as directed by God or a prophet or some other figure, then transposing these ancient teachings into the modern age. Literally millions of people have died under the hands of these practitioners who have chosen to ‘keep the faith’ against their enemies, be it mothers or fathers, sisters or brothers, children or strangers. Families have even destroyed their own families in spastic episodes of violent rage.

Anyone who has studied religious history will already know this, and anyone who studies or at least follows the news should know this too. It’s not just Muslims acting our their religious indoctrination, it’s Christians, Jews, and Hindu too. Many other lesser religions also contain violent writ, which when embraced by their adherents, has led to all kinds and types violent deaths.

Religion of all types is indoctrination, demanding the disciple to become both a believer and a practitioner of the sects teachings. Some people probably do not know what the different religions actually teach, but they probably should because these practitioners are all around you. It doesn’t take much to push just one of them off the tottering edge of sanity into a murderous rage, especially if they feel threatened or ‘attacked’. They believe that their belief is more important then your life.

American fundamentalists are a particular problem, believing in all sorts of utter nonsense. While it is very difficult to get them to suspend anger and disbelief and self-educate, it is possible with some of them. But to others who are deeply immersed in religious indoctrination, it’s not. They create artificial support bubbles of like-minded and like-indoctrinated people around them, even if this is just within a single family. Either the husband or mother will become the ‘spiritual center’ of what they think “the scripture says” and will categorically reject any other facts or understanding. Their children are literally terrorized, daily, living in fear, loathing and regret. More then a few escape at the first opportunity, categorically rejecting the years of indoctrination and terror that they lived under.

I worked with quite a few of these people in the years gone by and they are the same group of people that is now refusing to take any protective measures from the COVID-19 virus, refusing vaccinations, refusing social distancing or mask requirements and preparing for civil war. Many have joined up with militias and other subversive groups, preparing for both offensive and defensive actions against other Americans. They’re not all fundamentalists, but the vast majority are religious, indoctrinated and unwilling to self-educate.

This is what makes them dangerous, deluded and even deadly. They believe that they have all the ‘facts’ that they need to know, including their holy scriptures, which support their world views, which do not include other viewpoints and lifestyles. The writings of ancient men and tortured words is considered inviolate and sacrosanct and anything that would or does contradict this is to be rejected as evil, while ironically ignoring their own evil thoughts (hatreds) and vitriolic words that lead to violent action.

Most American ‘militia’ groups are permeated with these sorts of people, who are operating within echo-chambers of like minded individuals encouraging each other to take action. Facebook posts and Twitter feeds (before their banning) clearly portray this pattern of group-encouragement (and eventual immolation), which finally culminates in one or more taking the plunge and engaging in violence against perceived enemies (or even innocent bystanders). Much of this started with religious fundamentalism, incubated festering hatred, warped understanding and perceived justifications for violence.

Christianity has been subverted with over two thousand years of deliberate manipulation that has spawned tens of thousands of different groups, determined to be the “one true faith” through specific cherry-picking of religious texts and private interpretations. Many of these groups have fought and warred with each other claiming dominance and heresy, but they all have this things in common – none are accurate. None are historical. None of their teachings, including from the Old and the New scriptures are authentic. While they definitely do claim otherwise, its well-known by researchers and historians that what they believe and what really happened are vastly different historical facts verses fabricated fictions.

Some semi-modern groups have chosen to write their own scriptures, basing them upon the same general story lines found in the Bible. These too are historically inaccurate and include even more fabrications and fictions. These are easier to uncover since less time has transpired, but the same type of errors and fictional claims can be found (gross manipulation of historical fact). Anyone who is truly interested can find this out, there are now enormous volumes of well researched materials available that can trace the origins and history of these groups.

Religious fundamentalism is a severe problem in my opinion, and has led to countless acts of violence and death. As a form of protected speech in America, the lines between free speech and indoctrination are readily crossed (every Sunday and every other day of the week). But it’s still legal to create a cult, and this is tolerated in most countries (but not all). People are still free to believe anything they want, including the words of ancient superstitious men and the imaginations of complete idiots. But we all know that belief eventually leads to many other things, including decisions, actions and life choices. Incubating religious belief with other false teachings like racism, hatred, white supremacy or superiority only makes this worse.

Education and accurate information is the only known cure for indoctrination. Outlawing ‘heresies’ has never worked, and neither has genocide. In a perfect world, all the world’s religions would self-denounce and offer historically accurate information about their own teachings and beliefs, to finally bring the world’s populations on par with the real history, actual facts and true events, but of course, that would never happen (it would be like asking a politician to tell the truth). Individuals must do this themselves, take on the challenge to prove and disprove what is real, true, fact and fiction. Many people leave their faith through exhaustion and disillusionment, uncovering the soiled deceptions within, but there is a better way.

Read the expert research, and don’t allow anyone to dissuade you otherwise. There are volumes and volumes of compelling (life changing) research now available on every religious history, its beginnings, teachings, indoctrination and claims. Armed with this information you can now self-extract from fundamentalist teachings, losing the fear, paranoia and fantasy you were pickled in.

Your family (eventually) will thank you as you begin to drop and then abandon the indoctrination and false teachings. They will see the change that comes, if you let it happen. Your life will be better, their lives will be far better. You can rescue a failing marriage and estranged children. You can literally recover your very life before fundamentalism destroys you. I’ve seen it happen.